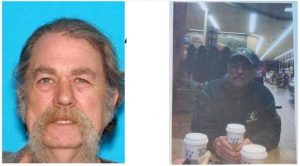 It is thought that Stone departed sometime during the night in a dark blue 1988 Toyota pickup truck that is also missing and that the reason for his disappearance and possible destination plans are unknown.

Stone is described as a white male, bearded, with green eyes, long wavy “bro hair” and about 5′ 9″ tall weighing approximately 250 pounds. The family-provided photo, viewable in the image box (the photo on the right side of the box) in which he is wearing a ball cap was taken in 2015 while he was at a lower weight. Sheriff’s officials say it is the most recent available photo.

According to sheriff’s officials, Stone had a minor stroke and has a speech impediment and mild learning disabilities.

The license plate of the missing pickup truck is 3N51579 and can be further identified as having a two-inch rear lift, Harley Davidson stickers on the back, oxidized paint, and hood dents.

Anyone who comes in contact with this man is asked to contact the Calaveras County Sheriff’s Office at 209 754-6500, extension 0.