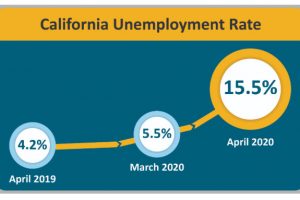 Sonora, CA – While the state’s jobless rate hit 15.5 percent in April, Tuolumne County’s topped that while Calaveras came slightly under that rate.

California’s unemployment rate increased 10.2 percentage points since March when it was recorded at 5.3 percent, according to the figures released by the Employment Development Department on Friday. The number of unemployed Californians rose to almost 2.9 million over just two months, surpassing the previous 2.2 million peak during the recession that took more than two years to reach.

Tuolumne County’s rate surpassed the states and nearly tripled, skyrocketing from 6.2 percent in March to 17.2 percent in April, leaving 3,750 unemployed out of its labor force of 21,840. Calaveras County’s jobless rate soared by nearly double, reaching 13.3 percent last month from 5.4 percent the previous month. That resulted in 2,730 unemployed out of its 20,560-workforce. Marin County had the lowest unemployment rate in the state at 11.1 percent and Imperial had the highest at 28 percent. Below is an EDD chart outlining the change in the state’s labor force.

Every one of California’s 11 industry sectors lost jobs in April. The Leisure & Hospitality industry posted the largest job loss at 866,200, which was more than double that of Trade, Transportation, and Utilities at -388,700, the state’s second-largest industry sector loss. Mining & Logging posted the smallest job loss at 500. This latest EDD report was conducted the week of April 12th with the number of claims highlighted in the graphic below.

Department officials note that the numbers will be higher for the entire month of April as it reports 5.1 million people have filed for unemployment benefits since March.