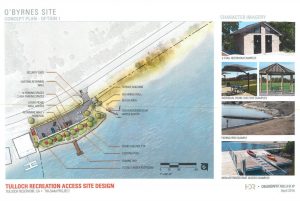 Tri-Dam Project spokesperson Susan Larson, who handles recreation and license compliance for the project partners, Oakdale Irrigation (OID) and South San Joaquin (SSJID) irrigation districts, appeared before the Calaveras County Board of Supervisors along with other key Tri-Dam Project leads to speak for the proposed facility to be located just before Tulloch Bridge on the Calaveras side.

As reported here, Tri-Dam has been attempting to build a day-use facility for several years and is required by FERC to do so as a condition of their license. Plans for the parcel at 7430 O’Byrnes Ferry Road, which formerly housed a marina that sold diesel fuel and rented watercraft, include some picnic tables and parking slots, a restroom, fishing pier and car-top launch area for non-motorized craft such as canoes and kayaks.

After several months of unrelated delays and a lengthy process that included a traffic study and multiple public hearings, the Planning Commission greenlighted the project on March 12. Two weeks later, the Planning Department received an appeal from The Lakes Treatment Center owner Bernadette Cattaneo along with Scott Frazier and John Paine, the latter two who own the two properties located on either side of the Tri-Dam parcel and operate vacation rentals.

Ahead of the supervisors’ meeting, the three neighbors filed a request for a continuance, arguing the COVID-19 pandemic and their own challenges with providing materials during virtual meetings were interfering with their ability to make their case.

District 4 Supervisor Dennis Mills with support from District 1 Supervisor Gary Tofanelli attempted to pass a supportive motion but were voted down by the rest of the board. District 2 Supervisor Jack Garamendi remarked that while virtual meetings were a challenge, the board doing the business of the people to the best of its abilities and that matters needed to continue being addressed without undue delays.

District 5 Supervisor Benjamin Stopper noted that the project had already been continued for 45 days over COVID-19. Larson acknowledged, “This is a permitted use and provides much-needed public access to Tulloch without any taxpayer dollars. When the appeal was filed, we were asked to support a continuance…and we sympathize and empathize with the challenges of Zoom.”

Planning staff confirmed out that the use of the parcel is permitted by right in C-2, consistent with the General Plan and in keeping with traffic requirements. They added that reasons given by appeal did not provide any evidence that the applicants did not meet requirements and performance standards, including landscaping, screening, signs, parking, and refuse storage.

Mr. Paine’s concerns had to do with an eight-foot wall on the property, which Tri-Dam had previously consented to along with a gate, buoys, and signage along the waterline labeling it a No Wake Zone. Ms. Cattaneo disconnected from the call when the continuance was denied, so the board did not hear her articulate additional concerns.

Mr. Frazier indicated that his issues were over density, trespassing, and fire access, indicating that he had an existing easement he could not locate documentation for but that if it could be found and determined valid, it could not be interfered with. While he requested that Tri-Dam fence the entire perimeter of the day-use area for security reasons, they mitigated the need through other measures such as a locking gate to part of the area along with surveillance equipment and staff patrols.

No public comments came in for or against the appeal. Ultimately, the board denied the appellants’ appeal 4-1 with Mills casting the lone dissenting vote. Speaking with Clarke Broadcasting afterward, Larson shared, “It’s our goal with the project that it becomes an enhancement to the community and provides the public with a safe and lawful way to use the Tulloch reservoir — and minimizes any potential trespass onto the bridge or adjoining private properties. So we are anxious to bring this project to completion.”

She says the next plans are beginning the work to get engineering and drafting proposal bids out. Once things begin moving in earnest she hopes the day-use area could be completed, up and running within a year’s time.