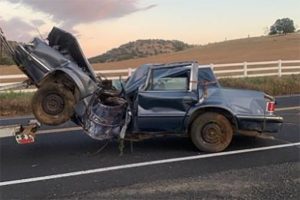 Wreckage after crash at HYW132

La Grange, CA – A La Grange woman was arrested for driving under the influence after her vehicle smacked into a tree along HWY 132 and she had to be flown from the scene with serious injuries.

The crash happened around 6:15 p.m. on Tuesday just west of Bonds Flat Road in the La Grange area. Sonora Unit CHP Officer Steve Machado reports that 22-year-old Kelsea Tishman was behind the wheel of a 1991 Dodge Dynasty heading west at about 60-65 miles per hour.  She lost control of the car coming out of a left curve. The vehicle went onto the dirt shoulder causing her car to turn clockwise into a tree.

Tishman was trapped inside the car and had to be freed by emergency crews. Suffering major injuries, she was flown to Doctors Memorial Center for treatment. Machado relays that further investigation at the scene resulted in Tishman being placed under arrest for DUI involving an alcohol beverage.