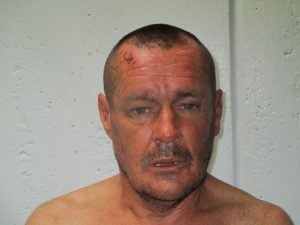 Sonora, CA — Officers who found a man reportedly stumbling around a shopping center lying down in a planter box wound up arresting him after he violently resisted a wellness check.

Sonora Police say 51-year-old Adam D. Knight of Sonora was arrested on multiple charges following the incident, which happened shortly before noon Monday at The Crossroads shopping center. After officers located him in the planter, Knight became verbally aggressive then stood and began advancing toward the officers, ignoring their commands to stay seated.

When the officers attempted to restrain him, Knight became violent, causing them to force him to the ground in an attempt to gain control. The suspect continued to resist while kicking at and attempting to head-butt the arresting officers. After he was finally in restraints, Knight spit at the officers as they worked to secure him in the patrol car.

Besides facing charges of public intoxication and battery on a peace officer, due to the level of violence he used attempting to prevent the officers from arresting him, Knight is also charged with felony resisting arrest.