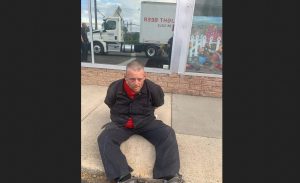 Update at 6:30 p.m.: Angels Camp Police have released an update regarding this case. It states, “We have received a request to reiterate that the victim in this incident was known to Joshua Cowan. State law prohibits the release of the victim’s identity, however, we want to reiterate that the victim was not a random person. We have also learned that although the dog mentioned in the first press release does belong to the victim, it has since been learned that the dog also belonged to Cowan.”

43-year-old Joshua Cowan allegedly hit a woman, who is a known acquaintance, on the back of the head, and took off in her vehicle. Her dog was also inside. It happened at around 7:40am on Tuesday in a parking lot in the 1000 block of South Main Street.

Officers responded and ordered Cowan to pull over, but he disobeyed and kept driving. A chase transpired for approximately nine minutes throughout downtown and along the Highway 4 bypass. He eventually exited the vehicle in the 300 block of North Main Street and was tased by officers.

He was then arrested and booked into county jail.

The victim sustained injuries and was transported by ambulance to an area hospital. The dog was released to a family member of the victim. No additional information is immediately available.