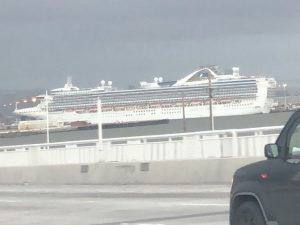 San Andreas, CA – Three new positive coronavirus cases linked to the quarantined Grand Princess cruise ship in San Francisco and have now been added to Calaveras County’s total, hiking the number to eight  — one is concerning as the patient showed only mild signs.

Calaveras Public Health officials relay the individuals include two older adult females and one older adult male from Copperopolis. Two of those patients remained outside of the county during their isolation. The third case involves one of the females that was quarantined outside the county. It is worrisome to county health officials since despite only showing mild symptoms her test came back positive.

“We are learning that people can be infectious without having typical symptoms of COVID-19 illness,” stated Dean Kelaita, MD, Calaveras County Health Officer in a written statement. “Because of this, it is important for people to stay home as much as possible, maintain physical distancing, and use a cloth face covering when in public for essential activities.”

The woman has been self-isolating since returning to the county, according to Dr. Kelaita, who adds that these new patients were part of a state investigation in March. It stems from the second voyage of the Grand Princess cruise ship that departed San Francisco in February.

These cases have been taken over by Calaveras health staff for follow-up with emphasis on the asymptomatic positive women conducting contact investigations with household members and others. All those with close personal contact will be placed under strict quarantine relays Dr. Kelaita.

The other five cases including another one earlier this week, detailed here. Two were also residents from Copperopolis and have since recovered. Two others reside in Valley Springs and another is from a community along the “Highway 4 Corridor.” Thankfully, no deaths have been reported.