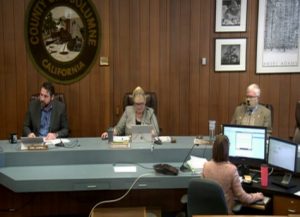 We reported earlier that the first case was a 31-year-old woman who contracted COVID-19 in Mono County and then traveled to a second home in Tuolumne County. She was treated at Adventist Health Sonora. Interim Public Health Officer Dr. Eric Sergienko told the supervisors that she has now successfully recovered. However, a companion she traveled with is still under home quarantine.

The second confirmed case was a 34-year-old woman who lives locally in Tuolumne County. She contracted the virus while traveling outside the area. Dr. Sergienko adds that she is now “completely recovered” and has finished the required quarantine period.

To this point, 266 tests have been administered in the county. 260 have been negative, five are still pending and one has been positive (the county’s other positive case counted toward Mono County’s count and not Tuolumne County’s).

Dr. Sergienko also announced the creation of a “Yosemite Gateway Area Coordination Team” that is comprised of leaders from Yosemite National Park, and the counties of Tuolumne, Mariposa and Madera. They are working collectively to develop strategies across the region and establish objectives. It includes divisions like intelligence, analysis, planning, administrative support and epidemiology. The group is also receiving scientific help and data from UC Merced.

Board Chair Sherri Brennan says she has talked with other rural supervisors who feel this new effort will be “a model for others,” and helps bring together the best available science and ideas.

The board also voted 5-0 to pass a temporary ordinance prohibiting residential and commercial evictions through the end of May, in response to the pandemic.

In addition, the board adopted a resolution strongly requesting non-essential travelers to refrain from entering Tuolumne County at the current time. It passed 4-1 with supervisor Anaiah Kirk in opposition. Kirk had requested a further-reaching resolution that would have asked Caltrans to place signs asking non-essential travelers to avoid coming into the county and would have looked into the potential creation of educational checkpoints.

However, there were legal questions raised by county staff about the ability to regulate traffic flows and concerns about unintended safety issues that could arise with checkpoints, which prompted the second (revised-similar) resolution. Kirk stated he was still in favor of looking at the potential of checkpoints because the situation could change and evolve quickly in the weeks ahead, requiring additional emergency actions.