Update: 14 Inmates To Be Released From Tuolumne County Jail 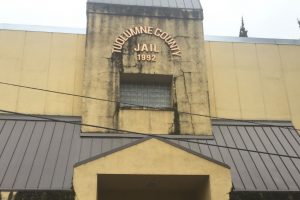 Update at 4:30 p.m.:  Following the California Judicial Council’s directive yesterday to reduce the bail amount for lower-level offenders to zero, Tuolumne County Sheriff Bill Pooley had stated that 40 inmates would be released before April 13th. This afternoon Sheriff’s spokesperson Nicco Sandelin relayed an update on the number of inmates to be released due to “gathering further/newer criteria information,” which he provided and can be found here. Sandelin shares, “After a thorough review of inmates meeting the criteria, only 14 will be released.”

As reported here last month, ten inmates were released and all were within 14 days of their sentencing completion to comply with Gov. Gavin Newsoms call to reduce jail populations. ”Further details on the new releases are below.

BJ Hansen wrote the story below.

It is a statewide effort to reduce the potential spread of COVID-19 among prisoners at county jails.

In response, Sheriff Bill Pooley told the Tuolumne County Supervisors this morning that an estimated 40 inmates will be released from Tuolumne County Jail before April 13. It will be phased out over the next week as the paperwork for each impacted inmate is completed.

After those inmates are released, an estimated 60-70 higher level inmates will remain at the jail.

In addition, we reported yesterday on the latest Tuolumne County Public Health Directive yesterday regarding the need to reduce non-essential gatherings. Tuolumne County is making a push to encourage residents to practice social distancing and is asking all visitors to refrain from coming to the county over the coming weeks.

Sheriff Pooley noted that his office has spent the past several weeks working to inform the public about the rules and directives. He warned, “After this Friday we will have done three weeks of outreach to the public. I’m telling you that the Sheriff’s Office will at that point transition from education to enforcement, and we will be out proactively enforcing the doctor’s order, up to, and including, citations for those who refuse to obey the order.”

He clarified that his comments are primarily geared at people who are going into closed recreation areas. Sheriff Pooley’s new blog, with more details, is here.