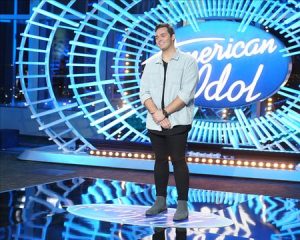 Sonora, CA – Although he admits the American Idol audition that won him his ticket to Hollywood Week nearly gave him a heart attack, a local singer is stoked to be moving forward in the competition.

Although he now goes by Devon Alexander, the 23-year-old Sonora native formerly known as Devon Sokyrka grew up making a difference in the Mother Lode. Before following his dreams to Los Angeles, he served as a Tuolumne County rec lifeguard and swimming instructor at Twain Harte pool, was a community educator for the Center for a Nonviolent Community and a social services manager at Hope House.

“I love Sonora so much I feel like I know mostly everyone — so if you don’t know me you probably have friends that do – and I am so excited for the support and really happy to be here [in the competition], obviously.”

Like his audition for Season 18, pre-filmed last November, the footage for Hollywood Week, featuring the Top 40 contestants who made it through, was produced in advance back in January. Devon’s performance is slated to come up on ABC sometime this Sunday or Monday at 8 p.m., according to the show’s previously planned schedule.

Unsurprisingly, COVID-19 has thrown a monkey wrench into the works. This week, ABC announced it is temporarily suspending activities, including rehearsals for the live shows which were slated to begin in April. Although the show previously planned to continue filming the live components without an audience, the decision to halt production was made by the show’s production company following the restriction of large gatherings in Los Angeles County.

The first of the live shows were scheduled to air less than two weeks away from this new suspension, so it is unclear whether American Idol will air new shows this April or revisit Season 18 once the situation is deemed safe.

For those who missed the airing of Devon’s L.A. audition as part of the March 8 episode, you can catch a recap here. It includes kudos from coaches Luke Bryan and Lionel Richie, although Katy Perry also cast a “yea” vote.

“It was really validating,” Devon readily admits. It was the first time I have ever put myself out there and I was terrified to be in front of three music icons!”

Moving forward amid the uncertainties of this season’s show, Devon says he is grateful for the opportunities that have allowed him to make a strong friend group among the other contestants.

“Music has always been something that I have been passionate about but I always came it close and personal, I would say,” he shares “Growing up, my mom Danielle was a guitar…bass player, so that music was kind of in our family and singing was always something that I thought I was good at but scared to show off. A lot of my friends no idea because it is something that I kind of kept private.”

About a year ago, he says he was looking to broaden his horizons, give music a try and live somewhere near a beach. After doing a couple of small shows and receiving contact from American Idol show producers, he thought the time was ripe. “Honestly, it has been the funnest experience of my entire life,” he enthuses.

“I’d written quite a few songs when I was younger, again, I never showed them to anyone, never did anything with them just because it was always such a personal thing and it’s scary to put yourself out there. But I grew up watching American Idol. It felt like it was something that was always on in every household…and I figured what better way to just kind of put myself out there and get a start.”

As for plans ahead, Devon muses, “I think that during this whole experience I have grown a lot and it has been super validating — putting in the work in the right place, and I have met so many people, made so many connections…hoping it will open some doors and let some people know what I have to offer.”

Towards that end, he anticipates releasing tunes in the coming weeks and months, including some self-written material on Spotify and Apple Music.