TUD In Negotiations With PG&E About Water System Transfer 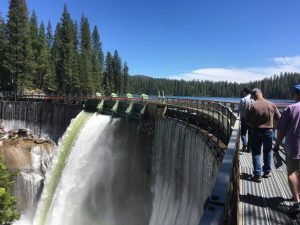 Sonora, CA — The Tuolumne Utilities District and PG&E announce that they are in exclusive negotiations about the potential transfer of the Phoenix Hydroelectric Project.

Under the proposed agreement, TUD would acquire the Phoenix Powerhouse, the Main Tuolumne Canal, the pre and post 1914 water rights, the Lyons Dam and Reservoir, Strawberry Dam and Pinecrest Reservoir.

TUD General Manager Edwin Pattison says, “The need to acquire water rights and storage has been a topic of discussion in Tuolumne County for more than a century. We view this as a once in a lifetime opportunity to secure a locally controlled water system to provide reliable cost-effective water for future generations.”

The Phoenix Project dates back to the Gold Rush and is located on the South Fork of the Stanislaus River. It provides the majority of TUD’s water supply via the Main Tuolumne Canal, which was built in 1851 to support mining and irrigation needs. It generates 2 megawatts. Lyons Dam was built in 1929. Strawberry Dam was built in 1916, creating Pinecrest Lake. The Phoenix Powerhouse was constructed in 1898 and later rebuilt in 1940.

Mike Schonherr, a Director of Power Generation at PG&E, says, “The  Phoenix  Project  is  no  longer  a  cost-effective  source  of  electric  generation  for  PG&E’s customers, but the powerhouse, water storage, and conveyance systems are important for TUD, which is a natural owner for the project.”

Under the proposal, PG&E would continue to own and operate other features of its Spring Gap-Stanislaus Project and would utilize water from Pinecrest to generate water at its Spring Gap Powerhouse.

No financial figures were immediately released by the two entities, noting that negotiations are still ongoing.  Information provided by TUD reads, “Because PG&E has essentially been providing this water for free as part of its generation operations, future costs to operate and maintain the facilities will need to be paid for by TUD and the community. TUD is working with an independent financial firm to study and evaluate costs, in an effort to look for creative and innovative ways to minimize the impacts to TUD customers and the community.”

TUD has just launched a new website to provide further community information about the proposed plan. You can find it by clicking here.

A series of town hall meetings is also planned for residents to learn more information, ask questions and provide input. The first will be Thursday, April 9, from 5:30-7pm at the Sonora Opera Hall.

“We invite the community to engage and play an active role throughout this entire process,” said TUD Board of Directors President Bob Rucker.

The transfer is anticipated to take several years to complete and ultimately would require approval by the Federal Energy Regulatory Commission, California Public Utilities Commission and the TUD Board of Directors.