District Five Is A Race To Watch As Ballot Counting Continues 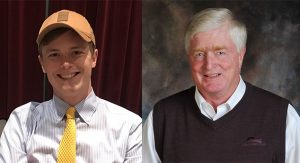 Sonora, CA — Tuolumne County Election’s officials hope to have the remaining ballots counted by late Friday, and many eyes are on the District Five Supervisor race.

When additional ballots were counted late yesterday, challenger Jaron Brandon increased his percentage of the vote to 49.1-percent, a little below the 50-percent threshold required to win the election outright. If no candidate exceeds 50-percent, the top-two vote-getters will move onto a November runoff election.

Speaking by telephone today, Brandon says, “Across the board, I think that it shows Tuolumne County residents want to see some change. This was not just an election, and a vote, I think this was a mandate to get stuff done. We may very well end up getting a majority, with the votes coming in, but if we don’t, I’m absolutely ready for November.”

Incumbent Karl Rodefer says he is also keeping a close eye on the results, and is preparing for a runoff election in November. However, he counters that his main priority right now is looking at the upcoming budget and tough cuts that will likely have to be made after the proposed sales and TOT tax increases (measures P and Q) failed to garner support. “My big focus in the coming months will be to give our public the best possible services that we can and focus on our number one priority, public safety.  That includes a lot of things besides law enforcement and fire services. We have some fiscal realities that are beyond our control, and quite frankly, are state induced. We’re going to have to deal with it.”

Both Brandon and Rodefer gave high thanks to their supporters and volunteers, and praised the third-place candidate, Mike Suess.

There are an estimated 4,000-5,000 ballots that still need to be counted in Tuolumne County. However, it is likely that somewhere in the neighborhood of 1/5th will be voters in District Five (Jamestown and Columbia). The election’s office is anticipating that the next, and possibly final, update, will come late Friday.

District One is also statistically up in the air, but the gap is wider. Challenger David Goldemberg has 48.2-percent of the vote and incumbent Sherri Brennan has 37.8-percent.