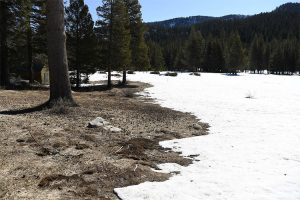 Sonora, CA – State water officials call the month of February ‘disappointing’ and say it may even set a record.

In another sign of California’s dry conditions, on Thursday Department of Water Resources officials held the third manual snowpack reading at the Sierra’s Phillip Station near Lake Tahoe. The survey found 29 inches of snow depth and a snow water equivalent of 11.5 inches, which is 47 percent of the March average.

“February rain and snow were quite disappointing,” said Sean de Guzman, chief of the department’s snow surveys and water supply forecasting section. “We’ll most likely end this water year below average. We just don’t know how far below. “

The first reading on Jan. 2, found the snowpack was 97% of the January average. But dry conditions since then have hurt the snowpack. This month there was no recorded measurable precipitation in the Northern Sierra at the eight DWR stations, according to de Guzman. He adds, “That has actually never happened before in its history since 1921.”

However, state water officials advise it’s too early to consider conservation measures while pointing to reservoir levels statewide that are either at or above their historical averages for this time of year.

“A few dry months really doesn’t make a drought,” cautions Chris Orrock, spokesman for the Department of Water Resources who notes the state would have to go through two dry years, “then we start looking at what additional conservation measures we need.”

Since the beginning of the year, state firefighters have responded to 280 small wildfires. Last year, in the same span, just 85 blazes were reported, details Scott McLean of CAL Fire. There are still two more months that could right the ship says de Guzman optimistically sharing, “Right now, 2020 is on track to be a below-average year but we could still see large storms in March and April that will improve the current snowpack.”