Sonora Man Threatens Others With Bat Including A Baby 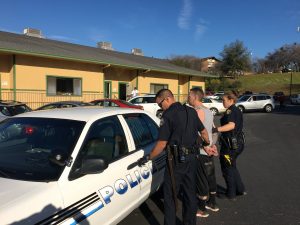 Sonora, CA – A Sonora man was arrested after terrorizing residents armed with a baseball bat at the Greenwood Village Apartments in the 400 block of Greenley Road and while swinging it entered one unit.

Police responded at around 3:15 p.m. on Thursday to a report of a male subject chasing people with a metal bat. Witnesses directed the officer to an alley between two apartment buildings where the suspect, 45-year-old Joseph E. Worthington of Sonora, was found without the bat hiding.

When the officer appeared, Worthington ran. After a short foot pursuit, Worthington was handcuffed on a dirt path in the tree line behind the Tuolumne County Senior Center, also on Greenley Road.

During questioning, victims of the attack accused Worthington of being agitated and yelling while raising and swinging the aluminum baseball bat at others. Sonora Police spokesperson Krishna Livingston recounts, “The victims included adults and children as young as one year of age.” She continues, “Nobody was injured, so he didn’t actually strike anyone with the bat. He didn’t make contact, but he was swinging it in an aggressive manner.”

Worthington was not believed to be under any drugs or alcohol during the incident. He was taken into custody for first-degree burglary, assault with and brandishing a deadly weapon, and resisting arrest.