Over $2.2 Million Worth Of Pot Seized From Calaveras County Grow 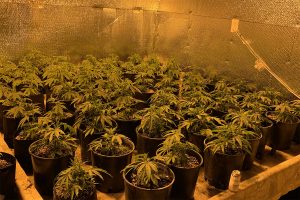 Wallace, CA – During the raid of a Wallace property, investigators discovered 1057 mite-infested plants doused with pesticides.

The Calaveras County Sheriff’s Office Marijuana Enforcement Unit on Tuesday searched a residence in the 10000 block of Crystal Drive near South Camanche Parkway, off Highway 12, for illegal marijuana cultivation. The entire home and a detached garage were being used to grow the illegal plants and process marijuana, in which 35 pounds of harvested pot was also found.

While canvasing the site, investigators discovered that some of the marijuana plants were infested with mites and had been treated with Chlorfenapyr an aerosol insecticide. It is specifically prohibited for use on food products and in commercial cannabis cultivation by the State of California, according to sheriff’s officials. The house was red-tagged by Calaveras Code Enforcement for violations due to dangerous unpermitted electrical modifications and unsafe modifications made to the home.

No persons were at the property during the time of the raid so no arrests could be made. This investigation remains ongoing.