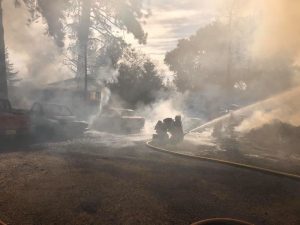 Update at 11:03am: CAL Fire says the flames have been knocked down at the Sierra Twain Harte Mobile Home Park. No injuries were reported as a result of the fire. Crews will remain on scene mopping up over the next several hours. More details can be found below.

Update at 10:25am: CAL Fire reports that when first responders arrived at a fire in the Sierra Twain Harte Mobile Home Park during this 10 o’clock hour there was a fully engulfed mobile home and the fire had spread to part of a second structure as well. Officials also state that “several vehicles” were on fire. Crews are working to extinguish the blaze. There are currently no reports of any injuries.

Original story posted at 10:08am: Tuolumne County, CA — There is a fire at the Sierra Twain Harte Mobile Home Park in the 16000 block of Big Hill Road.

A mobile home has reportedly caught on fire and it has spread to at least one other nearby structure. Be prepared for activity in the area. Numerous firefighters are arriving on scene. There are currently no reports of any injuries.