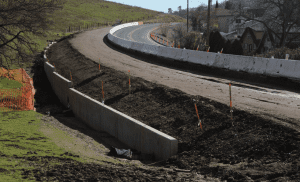 According to Calaveras County Director of Public Works Josh Pack, its crews in partnership with project contractor George Reed, Inc., are now winterizing the construction of the O’Byrnes Ferry Road Left Turn Lane Project in Copperopolis with waddles. Pack explains, “They look like straw sausages and we put those out. We can put tarps where it’s needed. So, with heavy storm activity, we’re not getting excess erosion dirt, mud and other debris going onto the road or to the drainage systems.”

Aa left turn lane is being installed along O’Brynes Ferry Road at the Duchess Drive intersection in Copperopolis, as reported here in October. While the hope was to have the project completed in December, the heavy rains in that month took their toll and workers, who had been on the job for the past two months, are unable to continue at this time says Pack. He adds an excessive amount of clay in the soil was also a determining factor due to costs, “It was the least of two options either spending the costly sum of money to add a line treatment, which would harden the clay and allow us to continue construction or delay for a few months. The cost to do the line treatment was about 70 to 75-thousand dollars.”

The total cost of the project is around $880,000. Residents in the Shores of Poker Flat subdivision have been pushing for a turn lane for about a decade. It’s homeowner’s association even contributed $60,000 to the project, according to Pack.

Plans are to resume construction in the spring when soil conditions and weather are more conducive. The goal is to have the job completed by May or June before the July 4th heavy holiday travel weekend.

Tori James contributed to this story.