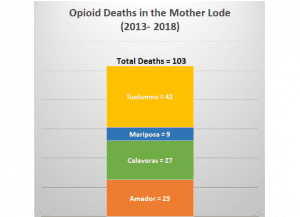 Sonora, CA – The Mother Lode, identified as a hotbed for opioid-related fatalities, has been awarded over a half-million dollars in federal funding to help mitigate the crisis through job training.

Mother Lode Job Training (MLJT) announced on Friday that it was recently given $512,500 from the Department of Labor to establish services geared to re-integrating dislocated workers, long term unemployed, and those affected by the National Opioid Crisis into the workforce.

The Central Sierra, which includes Tuolumne, Calaveras, Amador, and Mariposa counties, along with the Merced region and Humboldt County were the three hot spot workforce areas in the state sharing the dubious distinction for high measures of opioid fatalities, that were awarded the competitive grant monies.

According to MLJT Executive Director Dave Thoeny, “The relatively high fatality numbers are not big compared to say, Los Angeles…but with more than 100 deaths from 2013 to 2018 in the region, that is a lot for us.”

All services include a thorough assessment of participants’ needs, interests, and abilities, as well as job search assistance and support with housing, transportation and childcare costs when needed.

MLJT Grant Manager Amy Torres says the program is geared to assist those personally affected by opioid issues, it also provides job training to others unaffected by the opioid crisis who were also displaced from their jobs.

A Funding Tool Honed For A Purpose

Torres further explains how some of the applicants come to share their struggles. “Typically what we have found is that when people are interviewed as far as what grant they might qualify for and it comes up that we have one for opioid-related issues, people open up and share because there are a lot of people including professionals who are affected by this crisis.”

Sharing her perspective, drug and alcohol counseling supervisor and trainer Jonna Maynard at Turning Point of Arnold notes, “The opioid epidemic has impacted all people and families in the community and throughout and being a part of the solution to save lives is why we are here. It has had a major impact because more than half of our clientele is opioid dependent.”

Among those she has worked with to train is Rebecca Trammell, who is now a drug and alcohol counselor at Turning Point. Trammell comments, “Being able to get education and experience hands-on with clients has been very rewarding and has given me a lot to learn about this process of recovery.”

Thoeny hopes word of the funding will provide a heads up to local employers. “We are looking for businesses, nonprofits and public agencies that would be willing to hire some of the people who are part of the work program,” he says, emphasizing the incentives: the grant covers paying the employees’ wages, workers comp, and other related employee expenses.

For potential applicants, he describes the program is another opportunity for those who have been long-term unemployed or displaced — whether or not it might have been due to opioid issues — to bridge a job history work gap and get jump-started again.

MLJT, according to Thoeny, receives about a million dollars a year for its operations, which is about a quarter of its budget, which comes from assertively going for and winning grants, such as this latest one.

Public or nonprofit organizations interested in having a worker assist them in addressing the opioid crisis should contact Grant Coordinator Emily Graham at 209 536-4702. The program continues through September and is currently accepting applications at all four MLJT offices.