Police Nab Suspect In The Process Of Alleged Prescription Fraud 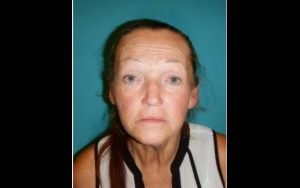 Sonora, CA – A woman’s efforts to fill a phony prescription were rewarded by a ride to jail.

According to Sonora Police officials, officers responded to the Save Mart pharmacy on Mono Way shortly after 5 p.m. Tuesday after receiving a report of a woman with a fraudulent prescription for codeine. Upon their arrival police contacted 58-year-old Angela Holcomb of Stockton, who was waiting for the scrip to be filled.

Officials state that a savvy pharmacy employee knowledgeable about the regularity of prescription fraud for codeine checked the Controlled Substance Utilization Review and Evaluation System (CURES) database, discovering that Holcomb had been making the rounds to multiple pharmacies. Pharmacy personnel then contacted the doctor listed on the prescription who confirmed the prescription was, in fact, fraudulent.

Holcomb was interviewed and ultimately arrested for attempted prescription fraud and an added burglary charge for entering the store to commit a felony. It turned out she had an outstanding warrant out of Stockton for vehicle theft and giving false information to a peace officer. Her assigned bail totaled $110,000.