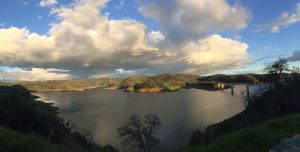 According to the documents for next Tuesday’s Tuolumne Utilities District (TUD) board of directors meeting, district staff will be recommending that the board authorize General Manager Ed Pattison to submit a formal letter of request to the United States Bureau of Reclamation (USBR) for a water supply contract.

A hydrologist by training, Pattison, hired last year, has spent significant time reviewing many of the district’s historical water-related issues, some of which date back a century.

Sharing that along with the fiscal budget and strategic plan, he and staff helped conduct a review of strengths, weaknesses, opportunities, and threats (SWOT) during a series of public workshops. Considering everything water and sewer related in Tuolumne County, he points to a glaring systemic issue over water supply, adding that the county has been struggling for the past hundred years over it.

“We need to diversify supply sources and diversions, interconnect systems through consolidation and make the system more efficient and reliable, and one part of the supply — and it always has been since USBR built New Melones — that they recognized the area of origins rights of Tuolumne and Calaveras counties,” Pattison explains.

Several months ago, Pattison met with USBR about how to proceed in legally securing those rights. “We believe in today’s environment to meet our Strategic Plan goals and objectives…we have to include New Melones in our portfolio and that cost, while significant, is worthwhile to ensure that during a drought we at least have another backup water supply,” he states.

While many residents recall that Melones became a virtual Deadpool by the end of the recent five-year drought, Pattison maintains that USBR indicates that the reservoir will not suffer to that extent in the next drought as it continues participating in the Bay-Delta voluntary settlement agreement negotiations.

While federal and state environmental documents will be required, Pattison surmises the cost will be relatively inexpensive “New Melones is such a large reservoir that it evaporates more than TUD would be diverting. So little, it is just noise,” he confides.

If preparing the reports comes in in the tens of thousands, the total price tag might be under $100,000, as TUD would be required to cover the USBR estimated cost of $25,000 for its staff to spend time reviewing a contract that would spell out the terms and conditions of when the water would be available.

“TUD already has pumps and a pipeline with the ability to divert from New Melones — we have everything we need but a contract…the last piece to be able to legally able to pull water,” Pattison says. Circumstances might be seasonal during dry-year and below normal years as well as major emergencies such as a fire or tree fall damaging or destroying part of the wooden flume system. Currently, the diversion in place would flow to the Shaws Flat Ditch, Columbia water treatment plant and downstream ditches.

TUD is also looking into concept engineering to extend a transmission line into Sonora. As Pattison explains, “While expensive, it’s expensive if you run out of water and cannot recover from that, and we are looking at state and fed grants and partnerships, leveraging ratepayer dollars to make it affordable.”

A ‘Slam Dunk’ To Secure?

As for the rights of senior water rights holders on the Stanislaus, such as Tri-Dam Partners, Pattison says TUD’s application of from USBR is federally recognized and that no act of Congress needed since it is already in the books. “It will take a two-year process with USBR but that’s it,” he maintains.

Asked if the process is a slam dunk, he demurs a bit. “I never want to say anything is a slam dunk because assuming that we do divert from New Melones it’s got to be coming from somewhere and so it will be coming from another entity — but USBR has put it that we are in federal legislation, and it’s authorized, so it’s really just an administrative process to execute the agreement.”

Although USBR has stated it cannot guarantee a certain number of acre-feet of water in a critical year, Pattison believes securing an agreement will be a relatively inexpensive insurance policy for the district to have in its back pocket. “We already have the assets in the reservoir, we just can’t [currently] legally exercise turning on those pumps and pumping water.”

Further making the case for formalizing a long-term contract with USBR, Pattison points to several other reservoirs established all over the county over the past century, totaling 5.5 million acre-feet of water storage. “TUD has basically zero of it. It is a travesty,” he says wryly.

In addition to New Melones, he counts off SFPUC’s Hetch Hetchy and Cherry Lake; Modesto and Turlock irrigation districts’ Old and New Don Pedro reservoirs, and Tri-Dam’s Beardsley, Donnells and Tulloch reservoirs. “Now, here we are, almost in 2020, scrapping to find a way to diversify our supplies, storage,” Pattison shrugs.

TUD’s right, while on the books, concerns Pattison in the face of major global changes impacting water supplies, including those in California. “I ‘d rather have this contract in our pocket now than have to fight for it five years from now,” he confides. “And I don’t think it is going to cost that much to get it done.”