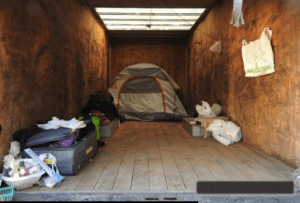 According to sheriff’s spokesperson Sgt. Greg Starke, the team served an illegal cultivation warrant last Friday in the 8000 block of Skunk Hollow Lane in Wilseyville.

While onsite, personnel eradicated 101 growing plants and 378 pounds of processed marijuana, which might in total be roughly estimated as worth about $350,000 in street value. Evidence photos include one of a tidy living space set up inside a large storage container with a pitched tent and personal possessions in suitcases lined up along the storage container walls. Stark says the team collected evidence for the ongoing investigation. To view photos, click into the image box.

They also located and arrested Roger Yang Moua, 50, of Cottonwood, Calif. He was booked into the Calaveras County Jail on charges of illegal marijuana cultivation, possession of marijuana for sale, and maintaining a drug house.

Stark encourages anyone with knowledge of illegal marijuana operations to call the Sheriff’s Anonymous Marijuana Tip Line at 209 754-6870.