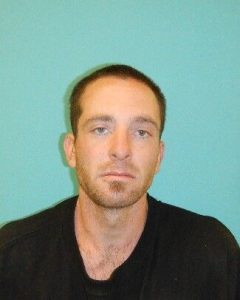 Sonora, CA – A local man was arrested on charges that include attempted arson.

According to Tuolumne County Sheriff’s spokesperson Deputy Nicco Sandelin, on Saturday, around noon, a patrolling deputy along Jamestown Road was stopped by a man who said he witnessed someone trying to start a grass fire near Fifth Avenue. The witness provided a physical description of the person, adding that the suspect had a blue lighter in his hands.

From the description, the deputy was able to find and contact 30-year-old Christopher Stone of Jamestown as he was leaving a house on Jamestown Road.

While Stone attempted to evade the deputy by instigating a chase that zig-zagged through Highway 108 traffic, the deputy caught up with and tackled the suspect to the ground. Stone continued to resist even as two other deputies arrived to help restrain him. They did locate a blue lighter on the suspect. Sandelin also reports that the deputy sustained minor injuries in the incident.

Sandelin notes, “There was a Red Flag Warning issued that day. We’re thankful an alert community member spoke up and could have possibly prevented a devastating fire.”

Stone faces charges of attempted arson, resisting arrest causing injury and resisting or delaying a peace officer. He was assigned a $25,000 bond.