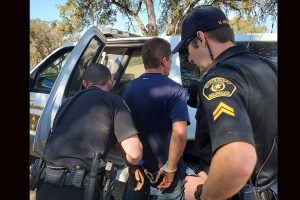 Burson, CA – A high-speed chase ended when a vehicle got stuck, forcing the suspects to jump out an run, leaving behind a scary find inside their getaway car.

While investigating a reported burglary in the 11000 block of Arapaho Way in Burson Saturday morning, Calaveras County Sheriff’s Dispatch informed the deputies on scene of a suspicious circumstance at a nearby home. Hiding inside that house and possibly armed was wanted felon 35-year-old Ricky Daniel Cavaco of San Andreas. He was on felony probation for theft and evading arrest in Tuolumne County and wanted on multiple Calaveras and Amador misdemeanor warrants.

While waiting for back up to arrive, a vehicle pulled away from the home and deputies recognized Cavaco as the driver. They tried to stop him, but he sailed by and the deputies gave chase. The pursuit ended in the 5000 block of Buckboard Lane in Campo Seco when after ramming several locked gates the vehicle became stuck. That forced Cavaco and his passenger, 21-year-old Jace Malinowski of Oak Harbor, Washington, to take off on foot.

The CHP caught up with Cavaco on a nearby road while deputies spotted Malinowski walking along South Camanche Parkway. Left behind in their vehicle was a loaded .22 caliber rifle and ammunition. Also, discovered was evidence of a butane honey oil lab used to extract concentrated cannabis and 28.5 grams of marijuana. Cavaco and Malinowski are both facing felony firearm, drug, and evading charges. Sheriff’s officials note that the incident remains under investigation.