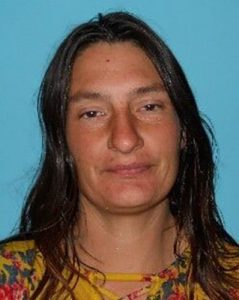 Sonora, CA — A Sonora woman was arrested after a deputy found a dangerous weapon hidden in a shopping cart she was pushing along a busy roadway.

39-year-old Brook Walsh was stopped by a passing Tuolumne County Sheriff’s Deputy on the shoulder of Highway 108 at the South Washington Street and Lime Kiln Road intersection around midnight recently.

The deputy was able to search Walsh and the cart as the suspect had three outstanding local warrants; one for drugs and two others for theft. Tuolumne County Sheriff’s spokesperson Sgt. Andreas Benson relays that inside the cart the deputy uncovered a billy club, which is considered a dangerous weapon and illegal for civilians to carry in California. It is unclear how Walsh came into possession of the baton.

Walsh was taken into custody without incident and booked into the Tuolumne County Jail for possession of a dangerous weapon and theft warrants. Her bond was set at $20,000.