Columbia Air Base To Get State Of The Art Helicopter 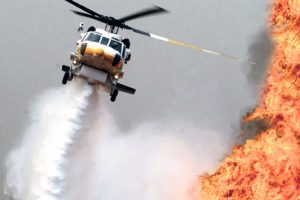 Columbia, CA – Still using a helicopter from the Vietnam era, CAL Fire Columbia Air Attack Base will be one of a dozen bases statewide to get a new high-tech “Firehawk.”

After inquiries from Clarke Broadcasting, CAL Fire spokesperson Scott McLean confirmed that statewide 12 Huey helicopters will be switched out for new Lockheed Martin Sikorsky S-70i Firehawks. A sketch of the one being delivered to the Columbia base is below. Each of the new helicopters cost $25 million for a total price tag of $325 million.

McLean affirmed, “We hope to see our first Sikorsky in Sacramento in about a month or so and start training and testing it, just like you would a new car.”  He adds, “We’ll start seeing the balance of them trickling in over the next three, three and a half years or so. I don’t have a time frame of when Columbia will get theirs.”

The new bird is a significant improvement, touts McLean, who details, “These helicopters will come with tanks, not the buckets. The buckets on our old Huey’s would hold about 360 gallons or so. The Sikorsky’s will carry about 1,000 gallons, have more power and fly faster.” He explains that with the tanks being more than double in size it will allow crews to fight the flames longer in those important first minutes on scene and through the duration of the blaze.

Besides the tank, the actual helicopter is also much larger, according to McLean, who notes that some bases receiving the new aircraft have been rebuilt to support the Firehawk. While he says no remodeling will be needed at the Columbia base, at least one or two new crew members will be climbing aboard.

Detailing the rewards for the communities receiving the better equipped Sikorsky, McLean further expounds, “It gives us better capability, some will be set up for night flying. We’ll have the latest technology in these aircraft. It enhances our responses to various incident especially Tuolumne and Calaveras counties considering the topography the fuel types.” For a video of the Firehawk in action, click here

McLean revealed other upgrades being made to CAL Fire’s air fleet, noting that seven new C130 four-engine prop planes with 4,000 gallons tanks will start arriving in Sacramento about midyear 2021. Whether one will make the Columbia base its home has yet to be determined. McLean says the good news is that the planes already there were refurbished a few years ago to carry 1,200 gallons of retardant and fly faster while still being “very nimble and able to get into canyons or tight spaces.”

McLean also relays that all of the state’s air bases are strategically placed, with each having no longer than a 20 minutes response time to any incident. A strategy that appears to be working as he boasts,

“We’re keeping 95 percent of our wildfires at ten acres or less and that’s through a combination of aircraft, dozers and ground crews.”