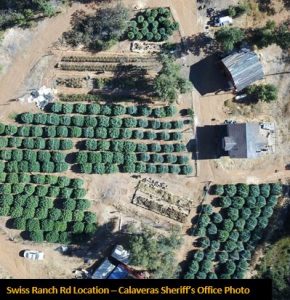 Calaveras County Sheriff’s spokesperson Sgt. Greg Stark reports that last Tuesday, a Marijuana Enforcement Team (MET) warrant search in the 12000 block of Armstrong Road in Sheep Ranch resulted in the discovery and eradication of 6,588 growing marijuana plants at an outdoor marijuana growing operation. Two suspects were seen fleeing the scene. Although they were not apprehended, evidence seized is being examined and the investigation is ongoing.

At a second address in the 12000 block of Armstrong Road, MET members seized 48 outdoor-grown marijuana plants and evidence at that location for further investigation.

Wednesday, the MET team’s travels took them to serve a search warrant at a parcel with no assigned address near the 9000 block of Swiss Ranch Road, where deputies destroyed 1,013 growing marijuana plants and a small amount of processed marijuana, also seizing a firearm and evidence on the scene. Calaveras Code Compliance was called to the scene and red-tagged three buildings for violations.

Friday, the MET performed a warrant search at an address in the 400 block of Ridge Road in Railroad Flat. Here, they eradicated 247 growing marijuana plants and arrested two suspects onsite. The arrestees were Farm Saeturn, age 64, and Kae Camero, age 27, both of Railroad Flat. They were booked into the Calaveras County Jail on felony charges of illegal marijuana cultivation, possession of marijuana for sale, and maintaining a drug house.

That same day at a second unrelated location, deputies served a search warrant in the 2000 block of Prussian Hill Road in Railroad Flat. Here, the team found a residence that was converted into an indoor marijuana growing facility. As it displayed numerous health and safety hazards, including severe mold, Code Compliance personnel were called in and red-tagged the home.

At this property, the team destroyed 2,126 growing marijuana plants and seized 22 pounds of processed marijuana. Deputies also located and arrested two suspects. The pair was identified as Caixiang Chen, age 53, and Juan Lin, age 55, both of Railroad Flat. They were booked into the county jail on charges of illegal marijuana cultivation, possession of marijuana for sale, maintaining a drug house, renting or leasing a drug house, and conspiracy to commit a crime.

Current variables used to estimate approximate street value are between $1,300 and $2,000 per plant and half-pound of pot when from an indoor grow; between $1,000 and $1,500 for plants and pot per pound yielding from greenhouses; and between $700 and $1,000 for plants and processed pot per pound from outdoor operations. However, with particularly robust outdoor plants, the value can be estimated as higher.

As always, sheriff’s officials add that anyone with information on illegal marijuana cultivation sites is encouraged to call the Marijuana Tip Line at 209 754-6870.