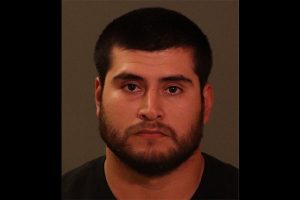 Imagine the shock for an Escalon parent when she checked her 15-year-old daughter’s phone and discovered inappropriate messages from an assistant football coach at the school. The parent reported what she had found on the cell phone to Escalon Police Detectives, who then opened an investigation.

On Monday (Sept.16) students and staff were surprised to see an officer arrest Assistant Coach Victor Perez Carillo, 26,  of Modesto and walk him out of the school in handcuffs. Police report Carillo had communicated with the student on Snapchat. Carillo allegedly requested nude pictures while trying to arrange to meet with her after school, according to detectives.

Carillo was booked into the San Joaquin County Jail on felony charges of solicitation of child pornography and arranging to meet with a minor for lewd purposes.