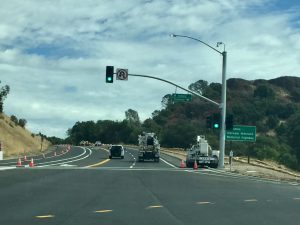 Sonora, CA – New traffic lights are up and activated at Yosemite Junction, part of a $3.3 million Highway 108/49 and 120 safety project that is now in wrapping stages.

Caltrans District 10 spokesperson Rick Estrada says the signals were turned on Tuesday at 3:15 p.m. and per the agency’s standard practice, an engineer assured it was sequencing as planned. Earlier in the day, motorists through the junction may have noticed that the traffic signals had been set to flashing while workers finished striping operations.

“There are still routine items to be closed out before the project is complete, but these aren’t expected to have an impact on the traffic itself,” Estrada confides. “We are finalizing our work on the software that will control the traffic signal sequence with an expected completion date of Friday…that means the signals should be fully functional for this weekend.”

As reported here, Caltrans planned for the project to be completed before the end of August, but an unusually wet May interfered with scheduling.

The new signals at the Highway 108/120 junction are intended to operate independently of each other with the intersection’s “thru-lane” remaining green except for times when a pedestrian or cyclist clicks the crosswalk button, which will turn the light red for long enough to allow a highway crossing. Immediately after, the light will return to green and remain so until another pedestrian or cyclist arrives and activates the button.

Regarding the newly installed concrete barrier within the junction intersection, CHP Sonora Unit spokesperson Officer Steve Machado advises motorists to be very cognizant to avoid colliding with it. He adds, “Pay attention to the new light signals…be very patient with everyone else on the road…watch out for some slow traffic and just be prepared for some stops.”

Tracey Petersen contributed to this report.