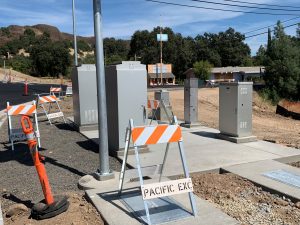 Sonora, CA – A $3.3 million highway safety improvement project at Yosemite Junction that was supposed to wrap up this month now appears headed for completion before September’s end.

Caltrans officials originally hoped the work scope would kick off in early May and end this month but late-season wet weather delayed the start. The project, intended to significantly reduce collisions, involves improved east and westbound travel and turn lanes on Highways 108/49 and 120, concrete barrier-protected refuge lanes, new traffic signals, and a crosswalk.

Anyone traveling through the area has no doubt experienced intermittent delays and perhaps more navigation more challenging than before through the hectic, equipment heavy cone zone where electronic signboards on either end signal a 45 miles-per-hour speed limit.

On Monday morning, commuters were greeted with a somewhat smoother path as the agency shared new photos showing off the newly installed electrical traffic light control boxes, a completed concrete culvert, and well-needed fresh pavement across the highway.

Still ahead for crews, besides the actual signalization completion, is more paving, permanent road marking and striping along with the building of new shoulders within the improvement area. Caltrans officials describe the planned “High-T” signalization there as similar to a typical signalized intersection.

However, since westbound Highway 108 traffic will only be forced to stop when a pedestrian or cyclist is crossing — and since not many of those happen there — the signal for westbound through-traffic will mostly remain green.

So, for a few more weeks, motorists through the area will still periodically experience flaggers, intermittent lane closures, and travel interruptions during the hours that contractor George Reed Inc., Caltrans and/or PG&E crews are in place, attending to the finishing touches. Officials say they could be anywhere from a few to 15 minutes.