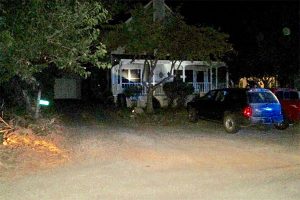 Tuolumne, CA – A suspect that ditched a stolen vehicle out of Nevada with a loaded gun inside remains on the loose.

The public’s help is now being sought by Tuolumne County Sheriff’s officials to put the man behind bars. After receiving several reports of a suspicious person in front of a home on Gardener Avenue in Tuolumne unloading items from a black Dodge Durango that had no license plate, deputies headed to that location. When the driver spotted a deputy coming towards him on that roadway, the suspect slammed on the brakes. He then hit the gas and pulled into a driveway of a home on Madrone Street. Jumping out of the SUV, he took off running.

Left behind in the vehicle was a sole passenger, 30-year-old Casey Bryan, who was recently released from custody on his own recognizance. A search turned up drug paraphernalia in his pocket and inside the SUV, deputies made a disturbing find — a loaded handgun.

Sheriff’s officials gave this description of the driver. He is a tall, thin, Hispanic man who was wearing an orange baseball cap. If anyone sees a person fitting that description or has any information on this incident, they are asked to call the sheriff’s office at 209-533-5815.