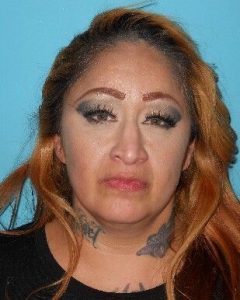 Sonora CA –- A report of a woman’s suspicious activity at a local bank resulted in her arrest along with three cohorts.

According to Tuolumne County Sheriff’s spokesperson Sgt. Andrea Benson, on Thursday afternoon, deputies responded to the Wells Fargo Bank at The Junction Shopping Center on Mono Way in Sonora.

Benson recounts that a woman in a white SUV parked near the business attempted to gain access to a bank account and became angry when she was informed that she did not have the proper identification. Although Benson says she was asked to leave, she remained in the area.

Arriving deputies approached the vehicle and contacted the woman, 44-year-old Sylvia Rodriguez. They also talked with the passengers: 49-year-old Michael Garza, 32-year-old Judy Caballero, and 41-year-old Oscar Caballero, noting that they were all from Fresno.

A records check turned up information that the SUV was recently involved in an incident during which a firearm was brandished at a law enforcement officer and both Garza and Rodriguez had been arrested during the incident. Deputies also found that Rodriguez was on searchable probation and Garza had a domestic violence stay away order protecting him from Rodriguez.

The four were all arrested and booked into the Tuolumne County Jail. Oscar Caballero, in violation of post-release community supervision, was jailed with no bail. He was charged with two drug sales-related felonies and for false impersonation of another.

Judy Caballero and Rodriguez both face five felony charges and a misdemeanor relating to drug sales, illegal bank card access and use, were each assigned a $50,000 bail. Garza was booked for two drug sales related felonies and possession of drug paraphernalia.