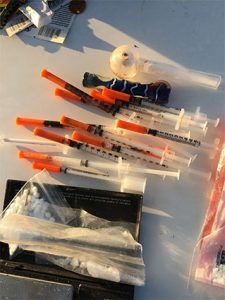 Sonora, CA – Seeing a vehicle parked on the sidewalk in front of a business at a local shopping center and then checking on the driver, who appeared to be passed out, prompted a concerned citizen to call 911.

Sonora Police dispatched an officer to the Crossroads Shopping Center on Sanguinetti Road in Sonora at around 6 a.m. on Tuesday to investigate, but when he arrived the car was gone. A quick patrol of the area found the vehicle parked a short distance away in the parking lot near the Regal Cinemas with 50-year-old Keith R. Dantonio of Groveland behind the wheel.

Police Sgt. Curtis Hankins says that the officer determined that Dantonia was under the influence due to his appearance, stating, “Kind of his heartbeat and how he was talking and moving around fast. He also showed symptoms with his eyes as his pupils were constricted and he had a very dry mouth.”

As Dantonia was the sole person in the vehicle, he was arrested for DUI. A subsequent search on him and the vehicle turned up several syringes, a meth-pipe, methamphetamine, and a scale.

Dantonio was arrested and booked into the Tuolumne County Jail for driving under the influence, drug and paraphernalia possession. Police did not give an amount of how much meth was found during the arrest.