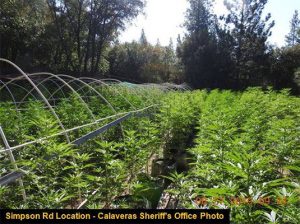 Another illegal grow also in Rail Road Flat was hit by deputies that same day. At this site in the 1100 block of Royal Lane, deputies seized 115 growing pot plants.

A day later, the team was at it again and discovered 759 marijuana plants on a property in the 4300 block of Buckboard Lane in Copperopolis. The plants were concealed within brush and trees on the property at various locations.

With no suspects found at these properties, no arrests could be made. However, sheriff’s officials want the public to know all are under investigation. Anyone with information on illegal grows or sites manufacturing concentrated cannabis is asked to call the Sheriff’s Marijuana Tip Line at (209) 754-6870. The total combined street value of the plants seized in these grows is just over $2,442,000.