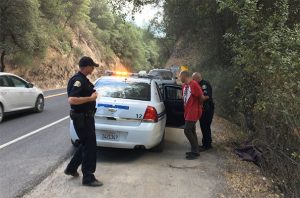 Sonora, CA – A wanted Sonora man was able to escape police twice but ended up in handcuffs after being caught catching some z’s.

A tip gave Sonora Police Detectives the break they needed to learn the whereabouts of 33-year-old Roy Allan Chandler Jr. of Sonora. Recently, during two separate foot chases, Chandler had been able to lose officers by heading into heavily wooded areas.

His running ended early this morning when he was found in a tent in the 700 block of West Stockton Road. Sgt. Curtis Hankins relays, “He was sound asleep. I woke him up by shaking him. He looked up and had a look of surprise on his face.” Grinning Sgt. Hankins adds, “We didn’t give him a chance to run this time.”

A search of Chandler turned up a bag of methamphetamine. He was arrested for an outstanding felony warrant for weapons charges along with fresh charges of drug possession and violating his probation.