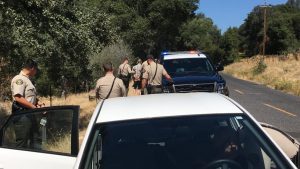 Ronald Deason being placed under arrest

The Tuolumne County Sheriff’s Office received several reports yesterday about a man allegedly inappropriately touching himself in the public view of many people.

The sheriff’s office says he was first allegedly doing the act in Jamestown, and later on the Highway 108 overpass behind Lowe’s in Sonora. After receiving the several calls, officials responded and spotted a man matching the suspect’s description on Old Wards Ferry Road in a Toyota Prius. Several witnesses confirmed that he was the alleged perpetrator. 63-year-old Ronald Deason of Auburn was arrested and booked into Tuolumne County Jail for indecent exposure.