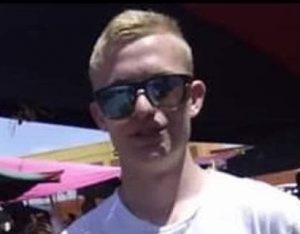 Sonora, CA – Recognize the man in the image box?

He is 18-year-old Jake Aaron Wiebe (Wee-b) who was reported missing by his family on Wednesday night. According to sheriff’s spokesperson Sgt. Andrea Benson, after arguing with his mother on the phone, he took off on foot from his Margaret Drive home.

Wiebe’s family says that he may have hitchhiked or got a ride to another county. That morning he was also heard talking about hiking the Table Mountain area, shares Sgt. Benson. He also likes to visit New Melones Lake, Don Pedro Lake, Shawmut Road in Chinese Camp and downtown Sonora.

Those know hangouts have already been searched by Wiebe’s family and deputies. A drone was also used by the Tuolumne County Sheriff’s Search and Rescue (SAR) to fly over the Jeanesse and Table Mountain areas with no sign of him.

Sheriff’s officials describe Wiebe as 5’9”, 145 pounds, with blonde hair and blue eyes. He was last seen wearing a green t-shirt and blue jeans. Anyone with information on his whereabouts or who may have seen him is asked to call the sheriff’s office at 209-533-5815.