Guaranty Bank Agrees To Be Taken Over By Feds 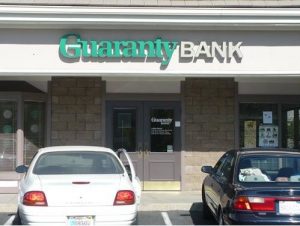 Longview, TX — In a move that has yet to take place Guaranty Bank, with 160 branches in California and Texas, has agreed to be taken over by the Feds.

According to the Longview, TX News-Journal, “In a filing Friday with the U.S. Securities and Exchange Commission, Austin-based Guaranty Financial Group, the bank’s parent company, said it probably can’t continue as a going concern and is looking for a potential buyer.

According to the Austin company, the bank is “critically undercapitalized” after recent write-downs related to its mortgage-backed securities portfolio. Guaranty’s primary shareholders are unwilling to inject additional capital, the company said.

Guaranty could end up as the largest U.S. bank failure of the year. Guaranty Bank’s board continues to operate, but the federal Office of Thrift Supervision “is exercising a significant degree of control over what had heretofore been the functions of the board,” Guaranty Financial said in the filing.