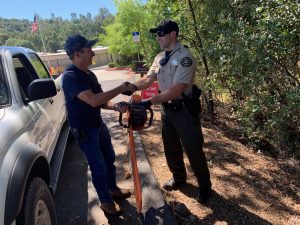 Sonora, CA – A parolee was returned to the pokey over the weekend after being caught strolling down a street with turned out to be a stolen chainsaw.

Sunday morning, Tuolumne County sheriff’s officials report that the deputy, who was patrolling on Allison Way in Sonora, spotted 27-year-old Michael Kern walking with the item. The chainsaw’s rightful owner was identified through a record check of the serial number through a local retailer and contacted.

After the man confirmed that one of his chainsaws was indeed stolen out of his garage earlier that morning, Kern was arrested and booked into the Tuolumne County Jail for burglary and violating his parole. The owner of the chainsaw, who responded to the scene, was reunited with his property.