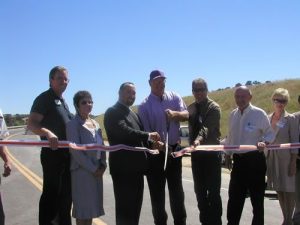 Angels Camp, CA — Around 100 came out for Wednesday morning’s official dedication of the Angels Camp Bypass.

Calaveras Council of Governments Executive Director Tim McSorley said the project was first conceived around 1958, and was completed thanks to the hard work of multiple local and state agencies.

Angels Camp Vice Mayor Jack Boeding said, “The big benefit in my eyes is the relief of the congestion downtown, and to get the historic area doing what it should be doing. That’s accommodating tourists and people that want to come and see our little town.”

The project is significant in the state because it is the first to be completed with help from Proposition 1B funding.

District One Calaveras County Supervisor Gary Tofanelli says, “I am truly impressed how the people of Calaveras County came out to embrace the opening of this Highway 4 section. I think it is going to open up the door for more tourists to come up through, now that they have a byway to go through all the way to Murphys.”

The project was completed months ahead of schedule by Teichert Construction.

A row of classic cars escorted numerous dignitaries for the ceremonial first ride across the Highway.