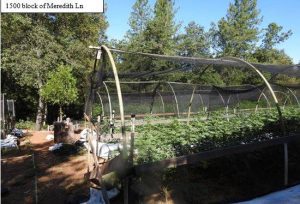 The raids on those operations were carried out from July 30 through August 1st, resulting in five arrests and over 3,000 pot plants seized.

The first day (July 30) two grows in the 1400 to 1500 block of Meredith Lane in Rail Road Flat were targeted. Inside hoop houses deputies found 1,365 plants. Ten dogs discovered on the property were also turned over to animal services. Another 99 marijuana plants were seized at the second location.

The second day (July 31) search warrants were served at three properties stretching from the 800 to 1000 block of Old Road in West Point. In these bust, 931 plants, over 225 pounds of processed pot and 2.76 pounds of marijuana concentrate (Butane Honey Oil) along with a firearm were confiscated. Three suspects, Isis Alexandra Pierce, 36, of West Point, Nuedoua Steve Her, 61, of Stockton and Shoua Yang, 40, of West Point and Stockton were arrested.

On the final day (August 8), three grows; two in Mountain Ranch along the 5700 block of Del Sol Lane and another in the 5500 were raided resulting in two arrests. A total of 730 plants and just over 117 pounds of process marijuana were seized. Taken into custody were Hung Sang Dinh, 49, of Elk Grove and Cuong Shi Vuong, 51, of Sacramento.

The public’s help is need to continue eradicating these illegal grows, according to sheriff’s officials, who encourages anyone with information on illegal marijuana cultivation or manufacturing sites call their tip line at (209) 754-6870.