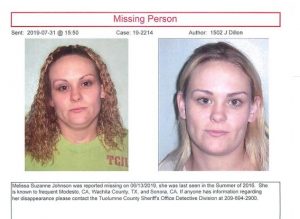 Sonora, CA — The Tuolumne County Sheriff’s Office is planning to start highlighting and sharing information about people that remain missing in hopes of generating new leads.

Today the office points out Melissa Suzanne Johnson was last seen in the summer of 2016, and was just reported as a missing person in June of this year. She is known to frequent Sonora, Modesto and Wachita County, Texas.

Troy Galloway was reported missing days after last being seen in January of 2016. He has ties to both the Sonora and Santa Cruz areas.

Darvis Lee Jr. was reported missing in October of 2010 and his vehicle was located in the Big Hill area of Tuolumne County.

Anyone with information regarding these cases is being encouraged to call the Sheriff’s Office Detective’s Division at 209-694-2900. You can see photos in the image box.