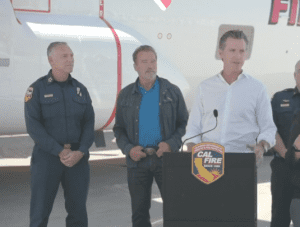 Sacramento, CA — CAL Fire received 361 requests for air support last year that it could not meet, and state officials say it has been a top priority to increase air resources.

Governor Gavin Newsom, former Governor Arnold Schwarzenegger and CAL Fire Chief Thom Porter held a press conference this morning at the McClellan Air Force Base near Sacramento to highlight some of the aircraft on the way. Newsom noted that seven C-130 tankers are being retrofitted and will be added to the fleet between 2021 and 2023.  Two black hawk helicopters, with night vision, are also being added, with the first one coming available in early September of this year.

Newsom praised Schwarzenegger for starting to put fire initiatives, and efforts, front and center, two administrations ago. Schwarzenegger spoke about the new offerings, stating, “I’m so excited that we are finally upgrading, and our great firefighters, the greatest firefighters, are now getting the equipment that they deserve.”

Yesterday Newsom also announced the authorization to hire nearly 400 additional firefighters, as conditions are drying out across California.