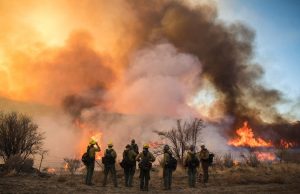 Washington, DC — A Democrat from California and a Republican from Montana are teaming up to introduce federal legislation that they hope will reduce the number of catastrophic fires.

Democratic Senator Dianne Feinstein and Republican Senator Steve Daines are working on a bill to expedite logging and fire prevention projects in areas around roads, trails and transmission lines.  They add that they are working with US Forest Service officials to finalize the bill’s text.

They have released a joint statement, reading, “Unfortunately, millions of acres of forests in our states and across the West remain at high risk of catastrophic wildfires, and there is strong consensus that fire seasons will only get worse. We believe additional resources are urgently needed to protect our communities and tackle these emergency conditions.”

The pair note that the average amount of acres burned by a wildfire is nearly double that of the 1990’s, and more than half of the Forest Service’s budget is dedicated to fighting wildfires, compared to 16-percent in 1995.

The bill is expected to be introduced following the August recess.