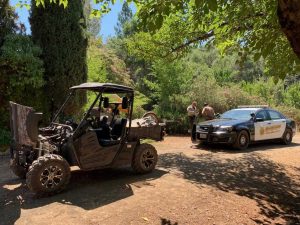 Jamestown, CA — A man was caught in Jamestown after allegedly burglarizing a Sonora area business.

The crime occurred yesterday morning along Microtronics Way. The Sheriff’s Office reports that two men were seen on surveillance video breaking into several vehicles and cutting a chain link fence in order to steal items. They even got away with a side-by-side off road vehicle.

A short time later, the sheriff’s office received a tip that there was a suspicious person spotted in the Hog Mountain Road area of Jamestown. Deputies responded and found 25-year-old Alex Kirkbride, along with the stolen vehicle, in a driveway on Twist Road.

Several tools and other stolen items were found in the back of the vehicle. Kirkbride was also wearing clothes taken from the business. Kirkbride was booked into Tuolumne County Jail on charges of burglary, vehicle theft, possession of a stolen vehicle and committing a felony while out on bail.