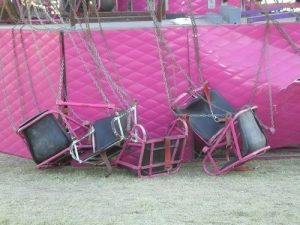 Angels Camp, CA– A lawsuit involving a 2008 carnival ride accident at the Calaveras County Fair has been settled for nearly $3.4 million.

According to a news release from the law firm Corsiglia, McMahon & Allard, Brass Ring Amusements, Chance Rides Manufacturing and North American Amusements will pay $3.375 million to Robert and Deena Milligan, whose five children were injured in the accident.  Corsiglia, McMahon & Allard is the law firm that represented the Milligans. It will receive over $1 million of the settlement.

On May 16, 2008, a Yo-Yo Chair Ride crashed during the Calaveras County Fair and Jumping Frog Jubilee, injuring 21 children. The California Department of Industrial Relations determined that the ride was not properly maintained by its owner.

Investigators found a damaged washer that had failed to hold a pair of nuts in place, which resulted in the cap screws becoming unfastened and the swing arms collapsing on the Yo-Yo Chair Ride. The accident injured 21 children. One of the Milligan’s five children suffered permanent brain damage and orthopedic injuries in the accident.

As a result of pressure by the Consumer Product Safety Commission, Chance Rides ordered all owners of the defective Yo-Yo Rides to allow it to install a metal plate over the cap screws and prevent the unscrewing of the cap-screws. Those cap screws are the ones that failed in both Calaveras County in 2008 and Six Flags over Texas in March 2006 injuring nine people.