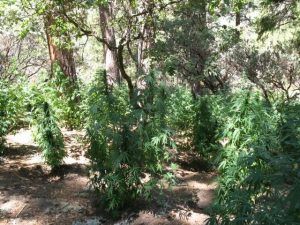 The site was on land in both Yosemite National Park and the Sierra National Forest. Two Mexican National males, who were in the United States illegally, were taken into custody while working the cultivation site during the raid. One of the men was armed with a loaded .45 caliber pistol concealed under his clothing. Both suspects were wearing camouflage clothing at the time of their arrest.

The total estimated worth of the seized marijuana is $14.6 million dollars.