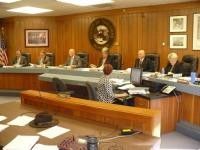 Sonora, CA – The Tuolumne County Supervisors have approved a budget for next fiscal year that cuts overall spending by about seven percent.

CAO Craig Pedro wrote in his memo to the Supervisors, "Lest there be any doubt, the County of Tuolumne continues to live within its means and adjust its budget and staffing according to new economic realities."

70 permanent positions in the county are being cut. It was noted that many of the positions relate to a planned regionalization of the County’s Child Support Services Department. 32 of the total positions are pure reductions.