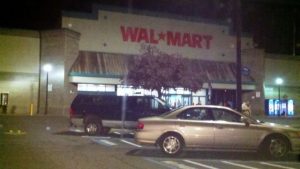 Sonora, CA– It’s the most anticipated shopping day of the year. Black Friday began early this morning across the country as well as the Mother Lode.

In Sonora, major retailers such as Walmart and Kohl’s were open before sunrise giving early bird shoppers the best chance for holiday deals.

While crowds throughout the U.S have been mostly peaceful, Los Angeles authorities say 20 people at a local Walmart store suffered minor injuries when a woman used pepper spray to keep shoppers from merchandise.

The Associated Press reports that a record number of shoppers are expected to head out to stores this weekend to take advantage of discounts of up to 70 percent. For three days starting today, 152 million people are expected to shop. That number is up about 10 percent from last year, according to the National Retail Federation.

The crowds are good news for retailers, many of which depend on the busy holiday shopping season for up to 40 percent of their annual revenue.