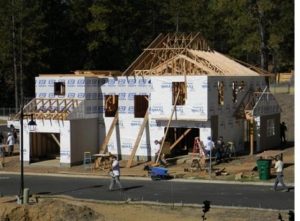 Sonora, CA– Tuolumne County’s Habitat for Humanity has received a grant of $150,000 to go towards construction of affordable housing in the Columbia area.

The grant, awarded by the S.H Cowell Foundation, will fund the new Parrotts Ferry Village Development, according to Executive Director Betsy Harden.

“We have been working with S.H Cowell on this proposal for nearly two years,” said Harden. “One of the requirements of the grant was that we raise at least 50% of the money needed for this first phase of construction prior to applying for the grant. Thanks to corporate grants and local donations, we hit the goal earlier this year.”

Harden says the S.H Cowell Foundation is a Northern and Central California foundation that focuses on education, youth and other community services such as transitional housing for the homeless.

Habitat for Habitat of Tuolumne County expects to build 34 single-family townhomes in the Parrotts Ferry Village Development in the next five to six years.

Harden says she was very pleased when she heard that S.H Cowell had awarded the grant to the full amount requested.

“We’re delighted,” she said. “Now we can complete our four townhomes this fiscal year. This means our first families will be able to get into their homes in the first part of next year, and the second set of families, not too long after that.”