Informal Board of Supervisor Polls 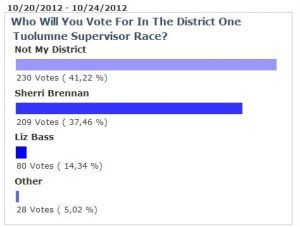 Sonora, CA — With just over a week to go until election day, back to back informal myMotherlode polls asked which Tuolumne County Board of Supervisor Candidate residents would vote for.

Sherri Brennan will face two time incumbent Liz Bass in the District One race. Thirty-seven percent were for Brennan and 14 percent, or 80 votes in the informal poll, voted for Bass. It is noted that 41 percent voted in the poll as not living or being able to vote in the district one race.

The second poll asked about the District Five seat. Karl Rodefer will go up against Domenic Torchia for the seat that is available because Supervisor Dick Pland chose to retire from public service. Rodefer was just a couple of votes shy of receiving the 50-percent-plus-one-majority in the Primary election that would have allowed him to avoid this runoff for the District five seat.

Once again the majority 50% were not in that district but 33% voted for Roderfer and 11% are for Torchia.

Follow our live election coverage on Tuesday November 6th starting at 8pm broadcast on KVML 1450 AM, STAR 92.7 and 93.5 KKBN.

The poll results are not scientific and there may be no correlation with the outcome of the upcoming election. For previous poll questions and results go here.